You Are Here: 115 years of sedimentation in the Urft Reservoir

115 years of sedimentation in the Urft Reservoir

The sediments of the Urftsee represent a unique archive for the influence of man on late Holocene sediment composition. During the last 115 years, the sediments have been deposited in the lake almost undisturbed. Due to construction work on the Urft dam and the inspection of the 2.7 km long Kermeter tunnel that drives the Heimbach hydroelectric power plant, the reservoir was almost completely drained in November 2020. This offered the rare opportunity to take detailed samples of the sediments. Furthermore, the entire reservoir area was mapped with an UAS (Unmanned Aircraft System). The work was carried out in cooperation between the Wasserverband Eifel Rur (WVER) and the Chair of Physical Geography and Geoecology (PGG) of the RWTH Aachen University.

The Urft dam was built between 1900 and 1905 according to the plans of the engineer Otto Intze from Aachen. At the time of its commissioning, the Urft dam was the largest reservoir in Europe and, with 12 MW, powered the most powerful water storage power plant in Europe. The reservoir has a length of 12 km and has a volume of 45.51 million m³ on an area of 2.16 km² when fully dammed. The most important inflow is the river Urft. Today, the Urftsee is completely surrounded by the Eifel National Park. 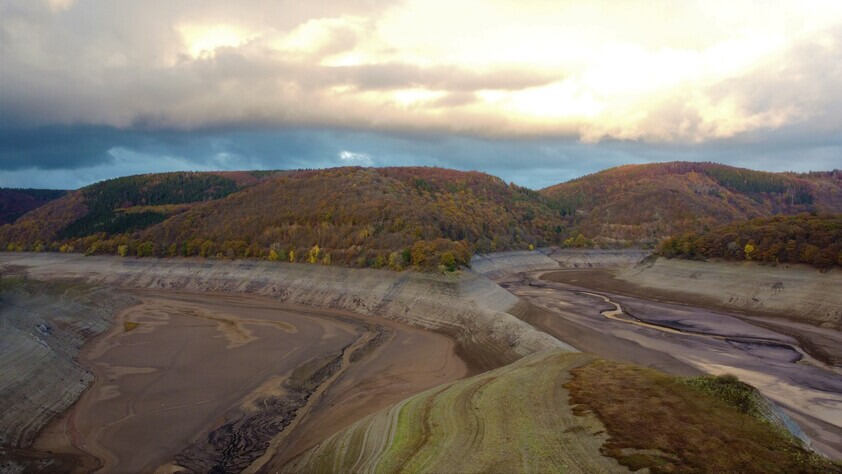 Within the scope of the project the sediments in the reservoir will be investigated sedimentologically. Geochemical markers will be used to quantify the anthropogenic influence on the sediments in the form of mining-induced contaminations (e.g. heavy metals) and to relate them to the history in the catchment area. A further focus will be to determine the microplastics content of the different sediment layers. Since microplastics have been introduced into the natural system by humans only in the last 70 years, with the beginning of mass production around 1950, the sediment layers can be differentiated in time. In addition, the sediment depth can be applied to the reference period of 70 years and thus gives an indication of a possible punctual sedimentation rate. For these investigations a total of seven sediment cores were extracted from the sediments.

Detailed aerial maps as well as high-resolution terrain models are generated from drone images. The terrain models enable us to determine the sediment volume and the changed reservoir space of the dam in comparison to historical topographic maps.

Preparation of the UAS